Badminton is a sport that is recognized and played by millions of people all over the world.

It is purely a recreational game and a highly competitive sport. For those players who have perfected the game, a series of professional tournaments have evolved to determine who the world’s best badminton players are. 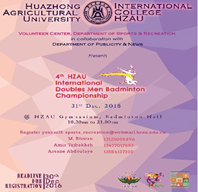 In total, 28 teams participated in this event and students belonged to different countries. Teams were categorized in four groups named A, B, C and D. In the opening ceremony a group photo was taken to all the participants.

Both semi-finals were really very interesting; spectators enjoyed and supported their favorite teams. In first semi-final Asad’s team beaten Ali Akbar’s team and qualified for the final match. On the other hand, Sajjad’s team failed to defend their championship and Rizwan’s team qualified for the final match after a very thrilling competition in semi-final. Final match was played between Rizwan & Sajid team and Asad & Shoaib; both teams were from Pakistan country.

The chief guest of this championship was Miss Wang Fengzhu from International College, HZAU.

At the end of the tournament, prize distribution ceremony was hold, trophies and prizes were distributed among the winners, runners up, third and fourth positions teams. 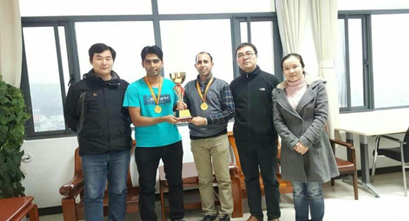 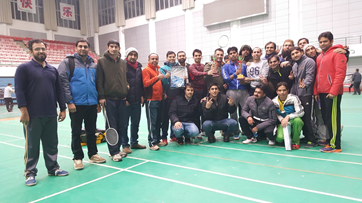 Group Photo with Winner and Runners up teams